So many people today are "waiting for a miracle." Some refuse to believe in a higher power unless they see a miracle for themselves. Sadly, the biggest critics are the ones who don't believe, even when presented with the most convincing evidence. Others are whole-heartedly awaiting a miracle, searching for something real in this world.

I believe that the enemy has used amazing advancements in the movies and technology to desensitize us to  the "unbelievable" and "impossible." Think about it. We are not amazed by the special effect dinosaurs in Jurassic World (don't get me wrong, I saw it twice in theaters and now own the DVD.) Even Bryce Dallas Howard referred to this when she explained that children aren't scared of their attractions anymore, so they need something bigger and scarier. We watch horror movies and we are not horrified. Five minutes into a thriller, we can foresee who will die first. We are becoming harder and harder to impress. And we know that behind every impressive thing is a catch, or just really advanced CGI.

Everything nowadays is being sold to us, and many times we reject things just on this principle.

I challenge you to recognize this fact, and shed the effects that this world has on you for a few moments. Because if you handle Jesus like you handle Jurassic World (again, one of my faves...), you will miss the out on the greatest miracle in history, the most important dose of reality.

On that first Good Friday, Jesus was brutally executed.

I remember watching The Passion of the Christ as a 14 year old. I had to leave the theater, overcome with emotion. I have gone back and forth on how I feel about that controversial film. Is it healthy to attempt to portray the greatest and most complex murder in history? Should I appreciate the outreach to a generation that craves wow factors and sensory overload? Either way, it's important that you read the story of Jesus' death, burial, and resurrection with a prayerful heart. Asking the Lord to reveal the truth, the depth, the importance, and the emotion that surrounded His death, burial and resurrection. Because only Jesus can fill that void in your spirit that craves to be astounded.

He was buried. The most final act in a person's life.
But, remember, Jesus wasn't merely human.

His life ended with the most humiliating of deaths - death on the cross. He was killed by those with nothing but hatred in their hearts. But the humility and hate was the key to the next part of the story. Nobody wanted Him dead as badly as those that killed Him. That made His resurrection from the dead that much more impressive! They made sure His body was mangled and torn before nailing Him to the cross. This was proof to the many, many people who met Him after He arose, untouched except for the piercing in His side and the marks in His hands and feet. There was no mistake that He was the same One who was hanging almost unrecognizably on the cross three days ago.

Hope was given, not just despite, but because of the hate and humiliation.

If you live in shame, Jesus can give you hope, not just despite yourself, but all the more because of what you have suffered. His hope is designed for that purpose.
If you have hate in your heart and desire something bigger than you to overcome it, Jesus died just for that purpose. He wants to give you the same hope. Yes, you.

We all want to see bigger dinosaurs. We want to be awed. We even want to be scared and taken out of our comfort zone. My challenge for you is to go to the Bible instead of the big screen. Believe me, it can be scary to step out of your comfort zone and follow Jesus. But He has already experienced everything you will ever experience, so take ahold of His hope and prepared to stand in awe. 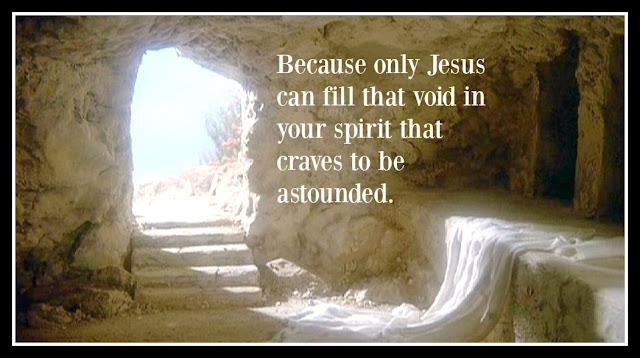 "In the end of the sabbath, as it began to dawn toward the first day of the week, came Mary Magdalene and the other Mary to see the sepulchre. And, behold, there was a great earthquake, for the angel of the Lord descended from heaven, and came and rolled back the stone from the door, and sat upon it. His countenance was like lightning, and his raiment white as snow. And for fear of him the keepers did shake, and became as dead men. And the angel answered and said unto the women, Fear not ye, for I know that ye seek Jesus, who was crucified. He is not here, for He is risen, as He said. Come, see the place where the Lord lay. And go quickly, and tell His disciples that He is risen from the dead. And, behold, He goeth before you into Galilee. There shall ye see Him. Lo, I have told you. And they departed quickly from the sepulchre with fear and great joy, and did run to bring His disciples word."     - Matthew 28.1-8

"And very early in the morning on the first day of the week, they came not the sepulchre at the rising of the sun. And they said among themselves, Who shall roll us away the stone from the door of the sepulchre? And when they looked, they saw that the stone was rolled away, for it was very great. And entering into the sepulchre, they saw a a young man sitting on the right side, clothed in a long white garment, and they were affrighted. And he saith unto them, Be not affrighted. Ye seek Jesus of Nazareth, which was crucified. He is risen. He is not here. Behold the place where they laid Him. But go your way, tell His disciples and Peter that He goeth before you into Galilee. There shall ye see Him, as He said unto you. And they went out quickly, and fled from the sepulchre, for they trembled and were amazed, neither said they any thing to any man, for they were afraid."     - Mark 16.2-8

"And they found the stone rolled away from the sepulchre. And they entered in, and found no the body of the Lord Jesus. And it came to pass, as they were much perplexed thereabout, behold, two men stood by them in shining garments. As as they are afraid, and bowed down their faces to the earth, they said unto them, Why seeketh the living among the dead? He is not here, but He is risen. Remember how He spake unto you when He was yet in Galilee, saying, The Son of man must be delivered into the hands of sinful men and be crucified, and the third day rise again. And they remembered His words."     - Luke 24.2-8

View my complete profile
In 2013 a group of girls in a PT program came together to start a Bible study. For two years we met twice a week and heard from the Lord. We learned about each other and the character of our God. We saw our prayers answered and our goals achieved. Now that season has ended and so have our weekly Bible studies. So this was created for this new season, so we can continue to hear from each other and share what Jesus Christ is doing for us.