God Adds Meaning to Everything ... Even that Comfy Wool Sweater!

I am about to over-spiritualize your whole closet, and maybe even your pantry...

This is coming from the girl who thinks that the Lord is trying to tell her to leave Target immediately, it's just not His Will for her to be there, because that super cute dress is not in her size. "There must be some supernatural meaning behind this!" screams my mind.

Ok, that may be a little dramatic, but there has to be a spiritual connection between the our passion for stylish clothing and fancy food and our desire to be close to God and our Christian sisters.

What do we always spend the first 10 minutes of our Bible studies doing? Talking! Many times about our everyday life, the seemingly mundane but actually pretty important things that only us girls can understand.

We crave that spiritual fellowship and often bond over the material.

I back this up with the fact that a good portion of our passage on the Virtuous Woman deals with the everyday, material things that make up every woman's life.

We know Jesus can take the material and turn it into something spiritual. He can take the seemingly meaningless and make it glow with His purpose. And what man can defile, He can use to cleanse our hearts.

Let's look at some of the material things our Virtuous Woman used...

She seeketh wool and flax, and worketh willingly with her hands.

Wool and flax were highly prized commodities in Israel, used to make fine clothing. I won't relay all of the information I found on the different ways of obtaining high-class wool in the middle east, but in order to get thorn-less, dirt-free wool, it must be sought after. Hard. And as a bonus, she is creating her household's wardrobe by hand!        (Shout-out to Shelly, who is learning to sew!)

When dyed a scarlet red color, wool was used in the blood covenant ceremonies between Israel and God.* This was the Old Testament way of attaining forgiveness of sins. Now we have salvation through grace because of Jesus' sacrifice on the Cross, instead. For,

Incidentally, scarlet was a hot color in this woman's household as well...

In my mind, I picture this as the antiquity version of dressing your children in T shirts from Bible camp, hanging Bible verses in your home, or wearing a Cross necklace.

It's an unspoken statement of where your belief and hope lay.

Girls, if you are saved, you are clothed with scarlet too. You are washed in the blood, as the old hymn says, and there is nothing in this world to be afraid of anymore.**

This next verse is speaking of Gomer, a prostitute whom God told the prophet Hosea to marry in order to create a powerful symbol of how Israel was essentially committing adultery against their First Love, God...

For their mother had played the harlot. She that conceiveth them hath done shamefully, for she said, I will go after my lovers that give me my bread and my water, my wool and my flax, mine oil and my drink.     - Hosea 2.5

Instead of seeking these things for the good of others, Gomer was given them for selfish gain and to the hurt of her husband and children.

Instead of willingly working for her goods, Gomer exploited herself to gain easy access to the things she desired.

Let's look at some other women who may look more like Gomer from the outside, but reveal a heart that appears more like the Virtuous Woman...

Rahab, the harlot, used flax stalks to hide the Hebrew spies in Jericho, then hung a scarlet cord from her window to show her allegiance to Israel and their God, causing her family's lives to be spared. (Joshua 2)

The woman at the well, with five husbands and one that was not her own, drew water for the Lord Jesus, and received the Living Water in return. (John 4.1-42)

Mary, a sinner who was told she was unfit to eat dinner at the same table as Jesus, washed His feet with her hair and anointed His head with oil to show her humility and her great love for Him. (Mark 14.1-9)

The widow woman who couldn't provide for her son put aside her own needs and supplied Elijah with water and bread and oil and then witnessed a miracle of healing from God. (1 Kings 17.8-24)

Please read more about each of these women this week, and if you are like me, you may relate to some of them, whether that be in word, deed, or thought. (See the Cool Story at the end of this post.)

Maybe you feel branded, unworthy of Christian fellowship, much less fellowship with God. If this is you, let me show you one last example of how the everyday commodities that we use to sustain life was used to sustain us spiritually and for eternity, given to us as a reminder of The Act that changed everything...

And as they were eating, Jesus took bread, and blessed it, and brake it, and gave it to the disciples, and said, Take, eat. This is my body. And He took the cup, and gave thanks, and gave it to them, saying, Drink ye all of it, for this is My blood of the new testament, which is shed for many for the remission of sins.     - Matthew 26.26-28

Bread represented Jesus' body that would soon be broken.

Wine represented His blood that would soon be spilt.

Spices would soon be brought to Jesus' tomb to anoint Him, but He was not there!

Yes, His body was broken, His blood was spilt, and He was laid in a tomb.
But He rose from the dead, He conquered death and, just as death couldn't keep Him, sin doesn't have to keep us.

He (God) causeth the grass to grow for the cattle... and wine that maketh glad the heart of man, and oil to make his face to shine, and bread which strengtheneth man's heart.     - Psalm 104.14-15

We have freedom in Christ! This truth should make our hearts glad and give us strength. Like Moses after meeting the Lord, His glory should cause our face to shine and reflect His love.***

Now go forth and over-spiritualize!

Cool Story: As I walked out of Moe's I was livid that they messed up my order. "Hello, how hard is it to NOT put black beans on my burrito?!" was my un-Christian thought, and possibly words, as I hurried back to the Christian conference I was attending, a free burrito in my purse. That night I walked past a homeless man. My first thought was "Stranger danger!" and my next thought was, "Wow, I just left this crazy cool conference and learned all about God's love and desire for justice. Maybe I should talk to this guy." Then I remembered that black bean-laden Homewrecker in my purse... I was really convicted about my small circle of awareness and uncanny ability to take material things for granted. I approached him and gave him my former source of anger and saw the joy on his face. I asked him some questions, then we prayed together. As we finished praying I opened my eyes and looked behind me. There was a line of young adults waiting to give this man something. Yes, we were blessing this man with material things, but what brought more joy to his face was what we were giving him spiritually. Never underestimate the power of ministering to someone's material needs. And never miss the opportunity to use those needs to connect with someone spiritually. I thank God for that man and giving me that moment with him! 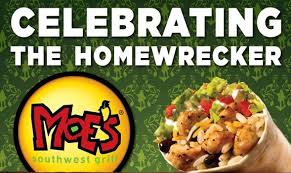 God moments. Brought to you be the Homewrecker.


^ The next day John seeth Jesus coming unto him and saith, Behold the Lamb of God, which taketh away the sins of the world.     - John 1.29

* For when Moses had spoken every precept to all the people according to the law, he took the blood of calves and toast, with water and scarlet wool and hyssop and sprinkled both the book and the people... And almost all things are by the law purged with blood and without blood there is no redemption.     - Hebrews 9.19, 22

** Thou shalt not be afraid for the terror by night, nor for the arrow that flieth by day. Nor for the pestilence that walketh in darkness, nor for the destruction that wasteth at noonday... Because thou hast made the Lord, which is my refuge, even the Most High, thy habitation.     - David, Psalm 91.5-6, 10

View my complete profile
In 2013 a group of girls in a PT program came together to start a Bible study. For two years we met twice a week and heard from the Lord. We learned about each other and the character of our God. We saw our prayers answered and our goals achieved. Now that season has ended and so have our weekly Bible studies. So this was created for this new season, so we can continue to hear from each other and share what Jesus Christ is doing for us.